With their debut-release “Impronte Nella Cenere“, the Italian math-rock outfit Squieti blend those post-hardcore vibes with a punk-attitude. Their eight-tracked album showcase their melodic talent with rather melodramatic drumming. It feels like being caught in a limbo with no way to get out of it, together with a constant barrage of melodic post-hardcore with a despaired vocalist. Even though emptiness might be his schtick, the band itself make up for a lack of atmosphere with the clinging of riffs with the concrete drumming. The technical aspects seem inverted. The arguably short hints of what could make up a rather soothing atmosphere is quickly struck down with the beat of a drum, favoring the rather amelodic connection between vocals and the general melodies of the guitars. It is clear that Squieti focus their darnedest on delivering a rather original hardcore-sounding math-rock experience, where the melody is the center of attention whilst the drums control the rhythm of the sound-scape. Positioning themselves in a fortress of their own whilst not letting anyone enter for real. There are lots of great things about their music but they have their weaknesses. Sometimes the math-rock inspired wholeness of their sound is hard to really appreciate. However, they make up for this with interesting choices of melodies and their rhythmic greatness. Their tracks seem to loosen up for the real hardcore sound when you get past the fifth track, so that’s by all means a time-stamp for when shit hits the fan for real. Listen to their album in full down below. Made possible on vinyl thanks to their friends Annoying Records, Boned Factory, Fast DIY or Die, L’oltraggio Autoproduzioni, Speed-Up Agency and Sons Of Flies webzine. Recorded and mixed by Stefano Romano in 2013, released on the 29th of January 2014.

Another Italian band called Pastel did a split with the British band Merridew, featuring two songs by them titled “Momento nove” and “Laminal“. Their sound is very reminiscent of Squieti, with the difference of it being more into the screamo sound. Which is more of a 90’s-inspired one, together with desperate vocals which can also be heard from the aforementioned band. It wouldn’t surprise me if they share the same singer, because it really sounds alike when everything comes together. One main difference is the atmosphere which Pastel manages to curate from a whirlwind of drums, guitars with a rather dreamy but realistic sound, together with the stillness in between breakdowns and experimental touches of rhythm. A rather weird combination of deciding to go with a baseline that dominates through sections of their songs, especially when it comes to their second song from this split. Then it all suddenly blasts away again, making it feel like I’m able to reach further for myself, into the sky and the distant continuum that is space. They’ve got a rather space-y sound which is psychedelic when it comes to some of what it contains, but not all of it. Even though a lot of their sound is based around tempo and going downtempo, there’s nothing that can stop me from completely relaxing to this sound. Maybe it’s because of their passion which is channeled throughout, or their off-shoot from the shoegaze to the screamo sound. Whatever you’d like, this is certainly borrowing a lot of the greatest stuff from the 90’s, fueling their gruesome invasion into enemy territory. It’s because there’s a certain unfamiliarity when you try to decide for yourself what’s next. You never really know with these guys, which is a plus in my book. I might’ve heard it time and again before, but I am really into what I’m hearing. This split-release was put out by Glass of Spit Recordings on the 13th of March, and you can listen to the Pastel-side down below.

In Brooklyn you find a band that has its roots down under, but above the ground they reside with post-punk overtones. With their interesting combination of metal, experimental rock, post-hardcore and post-punk they make way for who they’ve become. Since they haven’t been around for that long, let alone put out anything besides their newly released “Make Room For Waves” EP, it’s great to hear something fresh once in a while. With this comes Husbandry, whose singer sounds like somewhere in between Katzenjammer Kabarett‘s original misanthropic tone and the rather mesmerizing moments with the band reliq. Together with the breakdowns of pro-longed post-hardcore junkies caught in a time-machine. The band itself consists of Carina Zachary, Jordan Usatch, Arnau Bosc and Andrew Gottlieb. The fascinating thing about this release is that it was recorded during a weekend back in April this year, which makes it about a month later that they’re releasing it for the world to listen to.

So I got the opportunity together with Husbandry to put out one of the tracks from this release, on Repartiseraren. The track wasn’t really chosen by me to begin with, but I think it’s their best track on this release by far. Because in it they showcase the greatness of structured post-hardcore with post-punk baselines that soar through the landscape, together with erratic drums that keep the tempo to a max.  Just as they come into some kind of weird medley whereas Carina Zachary with her vocals make it an endurable process to listen to, as it moves back into the sound-scape which they created before. Moving back to the intermezzo once again in another part of the track, making it a very predictable but at the same time unpredictable track. I simply adore the melodies that are laden before me when you’ve taken yourself through it, together with cluttering hi-hats and complex rhythms howling in the background as the vocals feel even more dedicated and soulful. The track chosen for exclusive premiere was “Biralata“, a six-minute long song which you can listen to down below. If you’re interested in buying their album you can go to their Bandcamp.

Getting interesting e-mails is a part of what being a blog-zine is all about. Sometimes you get so many that you can’t sort everything out, and sometimes you get a few of them. Even though I believe this is the fact for many blog-zines, I don’t think that bigger magazines and so-called “alternative” websites take the most interesting out of the bunch. We aim to take both the interesting, and also those that might interest the audience. It’s not always about personal taste, even though it makes up a bit of what you’re doing. You try to stay objective, or at least as those conservative label-guys in the 1960’s, that according to Frank Zappa, said: “…now look at who the executives were in those companies at those times. Not hip young guys. These were cigar-chomping old guys, who looked at the product that came and said: I don’t know, who knows what it is, record it, stick it out – if it sells; alright. We were better off with those guys then we are now with the supposedly ‘hip’, ‘young’ executives, you know, who are making the decisions of what people should see and hear in the marketplace“. I thoroughly agree with that philosophy, and it can also be applied to the “art” of writing about music. I am by no means an artist, but I get the perspective.

Anyway, enough with my babbling. The people whom call themselves Zoo Books, sent me an e-mail in regards to their newly released demo. This trio are playing something in between post-rock and math rock, or so it appears when listening to it. This is also what they categorize themselves as. Don’t worry, their music is way more interesting to listen to than it is repeating their name in my head. The trio is comprised of Matthew Mawhinney on guitar and back-up vocals, Jeremy Link on bass, and Ruben Veguilla on drums and vocals. Their sound is a weird metamorphosis of what was already said, but it also ranges into post-hardcore territory – a genre that I have a hard time grasping, or understanding, the dynamics of. But I know what it sounds like, and there are more then hints of it in this demo. We consulted them ourselves and got them to lend us a hand when it comes to their music, by letting us put up a free download of the last track on this release, namely “Why Not Scorpion?” – a track I think symbolizes what their demo is, as a whole, but also where they might be heading afterwards. You can listen to their demo in its entirety if you wish, down below, but lend them a hand and spread the word. I think they deserve it. Download the track for free and listen to it wherever you please. The artwork for this release was created by Alicia Link. 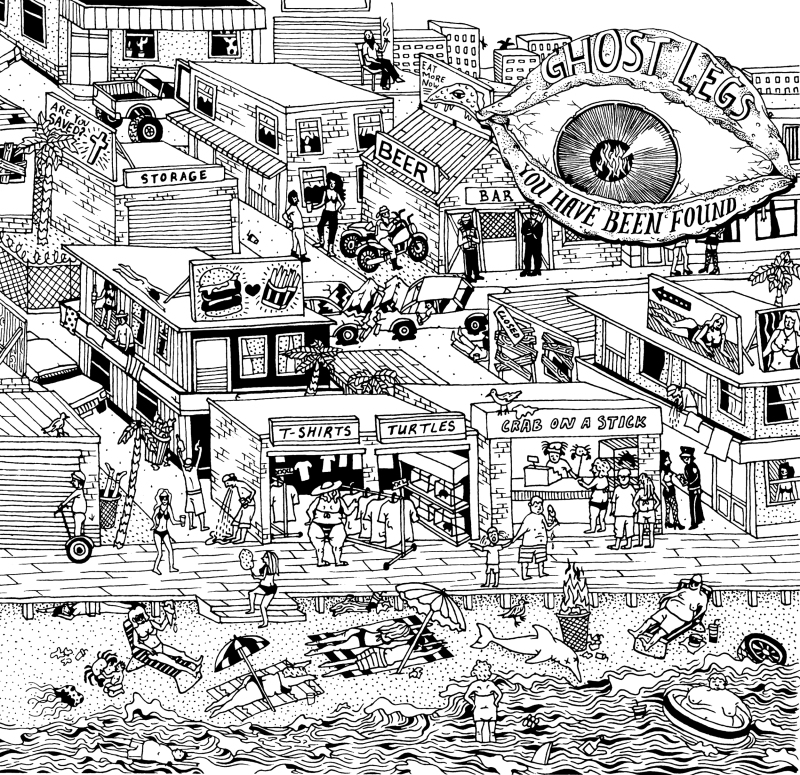 As we dream of hardcore, the most vile and nightmarish experience is nearby. With psychedelic strings attached, no frills and straight up post-hardcore deliverance – I deliver Ghost Legs upon you. They’re going to release their forthcoming album “You Have Been Found” all by themselves, on the 20th of April. This American fever is nowhere near to be over, since we’ve caught one of their songs in the net. It’s an assault on your mind, in the best uptempo and down-tempo hardcore mode – that you’d ever appreciate to experience. So, therefore, Invisible Guy presents to you a stream of their song “Suit & Sloth“. You can listen to it down below.

The band called Fighting Amp or if you will, Fight Amp as they call themselves now have been around for a long time – since 2003. They’re originally from the town of Williamsburg, which is laden perfectly in symbiosis with New Jersey. First they used to be more than they are now: but stringed it down to a three-piece, suiting their style of play, accentuating their instruments a little bit more. Up until now, they’ve managed to release a lot of split-CDs but also two full-length albums. Right now, they’re preparing for the release of their third album to date, named Birth Control which will be released in June. So I got the opportunity to talk to the vocalist/basist Jon DeHart about the music industry, their upcoming album, New Jersey and a ton of other things. Make sure you check this out.

END_OF_DOCUMENT_TOKEN_TO_BE_REPLACED

They’ve also started up their merchandise-site. Make sure to check it out:
http://kennedy.bigcartel.com/

If you live in the US, you can see them at this show on the 25th of March:
THIS OR THE APOCALYPSE/BEHEADING OF A KING/TWWK/FUD/KENNEDY/BEASTMODE