The busiest of them all seem to be the label Field Hymns from America, whom have been keen on releasing a booklet with a very special artist. This artist is Yves Malone – the creator of music for himself and to soundtracks for 1980′s independent movies – like Abysscoteque, The ECHO People and Zenith City. A common theme is the 1980′s but also the fact that every movie that he’s created his own music for, perpetuating a soundtrack of his own, are horror movies from this time period. Those kind of horror flicks that you wouldn’t know anything about unless you stumbled upon his creations, or if you were in any way involved in doing them in the 1980′s in America. Well, that might be stepping over the line a little bit, connoisseurs might have their thing and know it – but I sure as hell didn’t until I listened through his albums. These three releases are all a part of the booklet that Field Hymns are organizing to be put out for release, in honor of the already released albums which he put out himself in December of 2012. I’m here exclusively premiering two tracks from each album, but first you’ll get a description of what I think about them. Here you get FH044, FH045 and FH046. Now it’s time for FH045, which is “The ECHO People“! 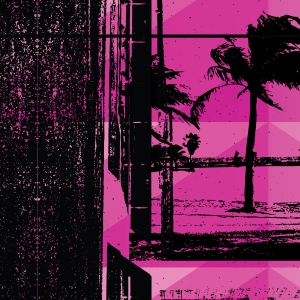 The ECHO People. It feels like a more angular experience, with melodies in-fighting together in a perfect shape of suspense-ridden attacks to the left and the right. With an even more freaky touch which reminds you of the horror flicks that we’re subjected to, through a synthwave assault. Layers upon layers of freaked out synthesizers that bloom out into the flowers in the sound-scape in which they’re planted. Setting off an armada of different sounds that would make you believe that you’re in space. The current is strong with the analog warmth that is pulsating throughout the landscape of sound. It takes a few minutes to realize that you’ve suddenly moved on to another track and that’s perfectly fine, because Yves Malone knows how to lay down the transitions between his more suspense-ridden atmosphere and the more angelic sounds. There’s a certain carelessness with the creation he’s pushing out to you, because it feels like it is improvised to a certain degree, but at the same time it feels like he’s careful where he places his fingers. Just so he can get the right melody in tune with the fast hits and stabs, so the droned out sound becomes even more of an experience. Even though a lot is happening, there’s a certain sense of fulfillment that you get when you’ve listened through it. You’re totally submerged into the unknown territory which he explores for you, you’re just a passenger on your way from place A to place B – even though it sounds sterile – the place you’re moving through is like something sent from above. It is especially noticeable in the longer tracks where he gets more space to make grandiose creations, rather than fast pulses of synthesizer’s delight. There is no dull moment when you’re blown away by the magnificence that is his sound. The difference that can be noted for “The ECHO People” might be minimal, but there is surely payed more attention to the complexities that he’s been working with in “Abysscoteque“. Even though it might be some kind of deja vu, I’m perfectly sure that I could’ve heard this somewhere else. It’s also hard to distinguish a trilogy from the essential make-up of it. You can’t simply take away one of the albums and say that it constitutes something new, because he’s drawn a red line that he follows through with. Similarities can be heard but also the difference in between. I’m haunted (in a good way) by the astonishing malevolence of his sound, but also by the fact that he can create such a wondrous thematic. There is nothing that would surprise you when you listen to Yves Malone, because if you’ve heard just a little bit of what he’s been making, you know its his signature sound. “The ECHO People” will be included in the booklet being released by Field Hymns in June on cassette, make sure you have your eyes open so you can buy it from them when the time’s here.