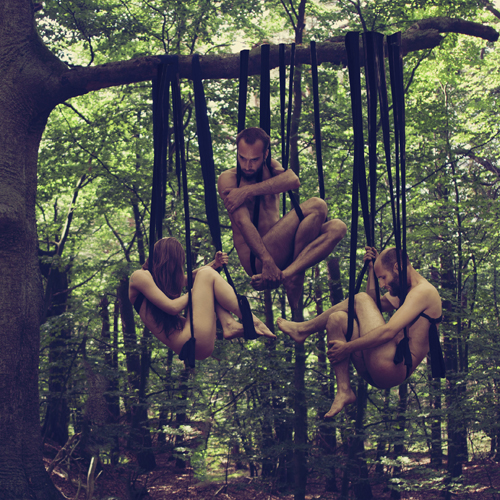 On a rather short notice, we’re pleased to be unlocking a whole new sphere of sound for you. For your own hedonistic pleasure and other worldly cravings, the otherwordly reliq have a new release that will be put up for pre-ordering by aufnahme + wiedergabe on this Friday the 21st of March. This three-tracked experience in post-metal and rough experimentation titled “Empire Of Broken Signs“, will you find the tracks “In My Dreams“, “Silent Dominion” and “The Sea“. For those of you that are inexperienced, this group is currently made up by Niko Shaddah Lfo, Carolin Langner and Brandon Rosenbluth. Having released their self-titled debut-album in 2011, an EP titled “Remains” in 2013, and a single track titled “Greed” – alongside numerous contributions elsewhere – it’s fair to say that this post-metal and artsy gargantuan will flow over. Notice the initiation rituals placed between the maelstroms of riffs in a line of volcanic outbursts that attain a sonic shape. The physical release will be put out as a one-sided 12¨ vinyl, whereas the other side will have an etching covering it.

Hear them whispering around you, hear them channeling the sound of elsewhere – a rather unique sounds if you’d ask those whom heard them. Although the roots have been ripped up, the quenching sound will deliver its calm to you. Between the crackling atmosphere and the hazy reach of the landscape of sound that suck the life out of that around it. Just to give a breath of fresh air with the pouring rain of sound. Washing away all the filthiness from the core. Well, many things can be said about reliq, but it’s undoubtedly an interesting release as such. There are too many things that can evolve through this weird combination of art, metal and experimentation. A paradox involving different intrigues and common ground – within the shape of music. One city and one word: Berlin, Germany. We’re proud to announce to you the exclusive premiere of “Silent Dominion” from their forthcoming release on aufnahme + wiedergabe. Stream and listen to it exclusively down below. Have one eye open as it will be up for pre-ordering on Friday. Wait eagerly until then and stream away. If you’re interested in participating in the release-party, go to this event which will be hosted by DEATH # DISCO at Urban Spree in Berlin on the 18th of May.