If one wished for their carelessness in these simultaneous releases, if one even wished for their ambiguous nature, if one only wished for their ambition – we’d have to close down fantasy for good, and re-assert ourselves with reality. Because they’re working around the clock, it seems, with putting out new wavelengths of sound from the factory. There are only two workers in this factory clouded with black smoke, coughing their lungs out and chanting, in the German Army. In what feels like less than a week, and maybe not even more than a month, they’ve released two records. In January, their album “Barrineans” was put out by the D.I.Y. outlet and label Lava Church, on cassette. Their latest release up to date; “Millerite Masai“, is the title of a limited cassette-release on Yerevan Tapes. The other is the one before that, titled “T’rung“, was another limited-edition cassette, this time put out by Lighten Out Sounds. In no less than two weeks and a day or two, they’ve been put out by two different labels. Cassettes in different forms and shapes are continually being put out, some even so new that people can’t really keep up with them. We’re hoping to remedy that, to make them stop in their tracks for at least a moment and figure out where they’re heading. Because they probably don’t know that themselves, and we do not know that either. One could guess and say that it’s their formula – it is what makes them interesting at all.

In what seems to be an unplanned happenstance, Invisible Guy intercepted their communications and looted their storage. Well, that’s just an unidentifiable story from a source we don’t even believe in ourselves, and it’s only meant to make this more exciting. But loot there is and there’s actually more then expected. We’re proud to be delivering some tracks from their forthcoming release on the American label Field Hymns. The release itself is titled “Tassili Plateau” and is expected to be out in the beginning of April. German Army continue with their concept of experimentation, of approaching the listener with the most unforeseen things in sound. After a while, things will get a little bit familiar, but they’ve strayed into the ethnic territory of music this time – even more. As some of the titles on this record would suggest, they’re looking into Asia a little bit more – and India, to be precise, but not entirely. The name for this record is actually derived from “Tassili n’Ajjer” (meaning: “Plateau of the Rivers“), which is a mountain range in the Algerian sector of the Saharan Desert. This plateau stretches from south-east Algeria – to the borders of Libya and Niger.

Expect the claustrophobia to be raging, different variants of their dub-esque experimentation fixated to industrial sounds, mixed with indigenous ethnic vibes. We’re proud to be putting up the track “Antiseptic“, which is the first track on the record, the track “Crooning Ignorance“, and the track “Smooth Voice“. You can expect an interesting change of pace between the tracks, different intonations and influences, weirdly arrhythmic electronica drenched in distorted beats, a looming industrialized but rhythmic chanson that will make you space out into angelic territory. An actual difference from when we heard them last. They’re ever-changing and what’s not fun to be had from that? Stream the three tracks made available for you, exclusively from Invisible Guy. Have a look-out on the label Field Hymns when April is getting close, because then it will be released there as a limited edition cassette. On the 1st of April. Feel the agony, the torturous sonic heat wave – and the posterior hallucinations that you’ll acquire throughout. 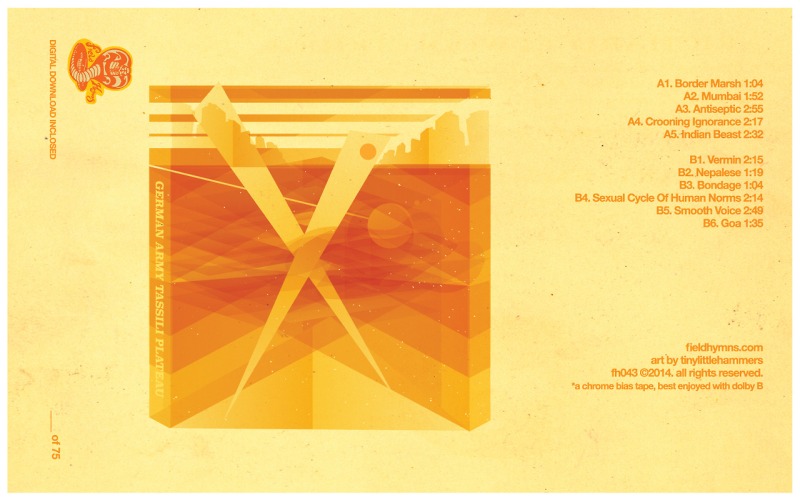 B4. Sexual Cycle Of Human Norms