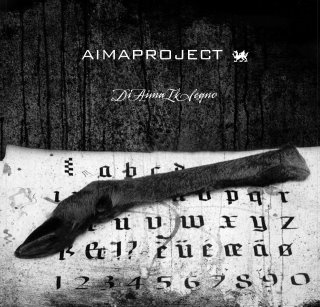 If you’re in any way familiar with martial industrial and neo-classical music, you’d probably know about “Sang Pour Sang“, the debut-album by the duo Les Jumeaux Discordants. Released on the French label Athanor, whom dedicates itself to releasing occult ritual ambient and industrial music. It was released as a CD, limited to 500 copies, featuring thirteen tracks. Even though we’re lead astray by their venture into modern classical, rather than neo-classical, they’ve got hints of both martial industrial, neo-classical and modern classical. However, their first release wasn’t the one I mentioned either, because in 2007 they released their self-titled “Les Jumeaux Discordants” on Misty Circles. Featuring a more experimental approach then their full album. Roberto Del Vecchio and his partner-in-crime Aimaproject (Luisa Papa) constitute Les Jumeaux Discordants, as a duo. In 2012, both Robert and Luisa contributed to a compilation under the name of “Di Aima II Segno“, together with a whole roster of artists from both Old Europa Café, Steinklang, Hau Ruck! SPQR and other labels. Even though it’s a compilation, it can be said to be an anthology, a kind of tribute to the artists they’ve worked with. The compilation, or rather anthology, was released on the label Show Me Your Wounds Productions.

Together with Invisible Guy in a unique collaboration with Les Jumeaux Discordants, we aim to bring you the track “Horus” from this limited CDr compilation, but also “Stanze” – the martial-industrial counterpart, just to show you the complex nature of their music. It’s a channeling of both the vocal talent of Luisa Papa and the composition skills of Roberto Del Vecchio, as the old Europa awakes again, if only for a moment. The ritualistic nature of the track is both mesmerizing and brings a calmer dimension together with the more alarming and lurking feeling; of urgency. Together with the storm that brews with the simultaneous and rhythmic hits on the drums, as if it was a call to war. Stream this track exclusively down below. You don’t even know what’s begun, since this is the first track to be put up there in a series of four. Bringing you the first two from the same compilation.