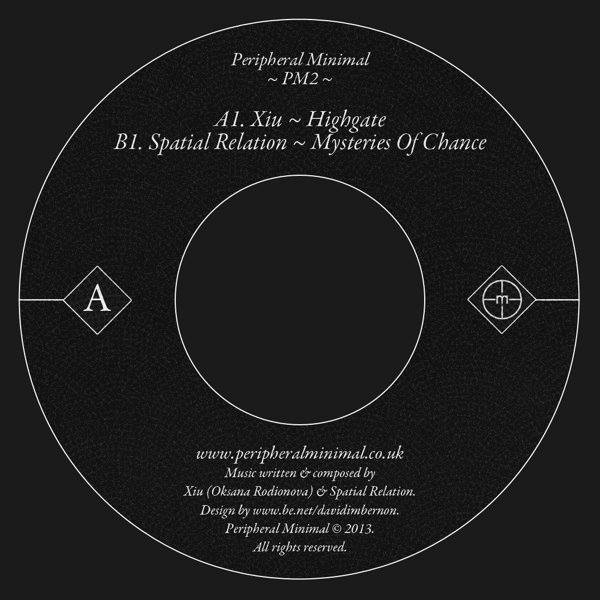 Peripheral Minimal is a sub-label to Peripheral Records, which is a label based out of Britain. In a short period of time, Jason B Bernard have garnered a lot of attention. Maybe not on the basis of blogs writing about it, but he’s gotten a lot of followers for his rather newly created sub-label. The first release was Replicanti, a synth-wave group based out of San Fransisco, whom released their first EP á la four tracks on Peripheral Minimal. Main focus is on minimal synth and cold wave, which makes it even more interesting. So, as the 7¨ split between Xiu and Spatial Relation was announced to be released sometime now in Fall, it wasn’t enough for me. Therefore, in an attempt to collaborate, Invisible Guy and Peripheral Minimal will give you an exclusive preview of both the tracks that will be featured on this release. It will mark the second release on this label. But, I also  had some time left on my hands to ask the label-boss Jason Bernard a couple of questions regarding his first release, the purpose of the label and the second release. Plus some other question that magically happened to be thrown in. You can stream and listen to previews of Xiu’s “Highgate” track and Spatial Relation’s “Mystery Of Chance” track, down below.

I know that Peripheral Minimal is a sub-label for Peripheral Records. But why did you want to branch out and focus on minimal synth and coldwave, too?

– Well ultimately it was like returning or going home, if you like, to my original love of Synthpop or Future Pop as it was known when I was younger, anything from Depeche Mode to Fad Gadget via Cabaret Voltaire and The Human League! Plus it’s re-emergence in recent years made me decide to ‘test the waters’, and I’ve been pleasantly surprised by the quality of the latest crop of Synth acts, basically reinterpreting the classic late 70s / early 80s sound.

Since it’s a sub-label, do you go by things the same way when releasing or are there more differences than a particular focus on these two genres?

– I don’t think there’s much difference in the way I operate either label, perhaps just the way in which I advertise releases to different markets. Marketing is ultimately the hardest part to get right!

Your first release was “Electric Mistress” by the San Fransisco synthwave act Replicanti. Why did you choose to make that one your first one and how did you go by before you released it?

– I was initially approached by Replicanti as he had an E.P. ready and was looking for a new label via a ‘tip-off’ from a friend! I really liked what I heard and decided to give it a chance, it seemed like the perfect marriage between early EBM and Synthwave. I haven’t been disappointed.

Do you have any acts that you’re going to sign in the near future, since Xiu and Spatial Relation will be releasing their forthcoming split on your label?

– There are a few releases in the pipeline, a 7″ by Irish duo ‘KuBo’ and another 7″ by ‘Ferdinand Carclash’. There are also some tentative deals on the way, but I’m keeping that a secret for now!

How did you go by when you decided you wanted to release those two on a 7¨?

– I’d heard both acts separately and thought that the two together might make a fantastic pairing! They’ve both gained a lot of publicity and attention of late, down to the sheer fact that they create great modern synth music, with that classic retro touch!

Thanks for answering! What have you got planned for the rest of the year?

Listen to previews from the upcoming 7¨ split with Xiu and Spatial Relation, down below. The release itself will come out sooner or later, but definitely this Fall.