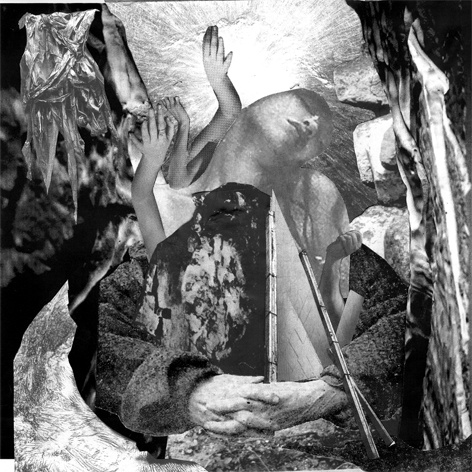 Portugal delivers a mystic group that goes by the name of Tendagruta. They’ve been around for a compilation in 2011, by the name of Futuro Primitivo, released by You Are Not Stealing Records and Chilli Com Carne. In May, they also released “Cloaca“, which was originally released on Latrina do Chifrodo in 2011. However, their latest effort, which goes by the name of “Ensalmo do Sargaço” – is a record which compiles tracks they recorded from the time-span of 2010 to 2012, in various locations. Some of the tracks have also been featured on various releases. Now, let’s get to the point at hand. Their solemn and sincere mixture of the fundamentals of industrial, with a gritty layer of dark ambient, surely paves a way into the ancestral but occult thinking of Tendagruta. You’re drawn into the atmospheric content, in a malignant sphere of collectivized agony. Channeled into the medium that is the aforementioned genres, in an unorthodox and unprecedented heavy-weight competition, in between the different elements that constitute the make-up of each song. Hailing these dark landscape, showing immense respect for what can be thought to be a natural conscience, driven between the edges of virtuous and natural industrial – to the brink of thoughtfulness. Imagine yourself seeking a treasure that is hidden from plain sight, in a barren world where caves are your friend and the water can be unpredictable. As elements form together and shape the world you’re orienting yourself in. Tendagruta does precisely that, as they utilize whatever they can get, just to have those naturalistic sounds. Nothing can be more analogue than this, and it feels like they’ve gone long ways to make it sound like that. Perhaps I’m wrong, and this is just an illusion to frame my mind into this way of thinking, but either way – they’ve succeeded with their intentions and that’s what counts.