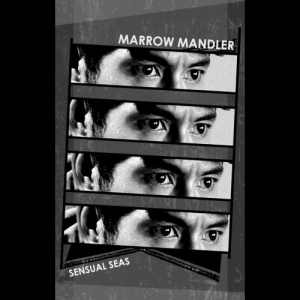 If you could see the world through other eyes, or if you’d see Tatsuya Nakadais eyes, you’d be petrified. Marrow Mandler is the brainchild of Sascha Mandler. It seems like if he touches your soul, it will be in a realistically but cold manner. With the opening song “Shattered Acticipations“, he delves deeper into the sphere of power electronics. Contracting the brutality of the generic term “power electronics“, but subsequently increasing the melodic content in and of the aforementioned genre. The undertones of the sound-scape are vicious, as the melodic content burrows itself deeper into our souls. We’re left behind, left for dead, as the powerful electronics smear and crush everything in its wake. Possibly the more intriguing material that could’ve been found in that particular genre, as the fondness of power electronics arises anew from this particular song. Leaving no way out, continuing with “Shed Skin“, as you’re forced into a corner of fight-or-flight. But not for long, as the landscape is re-shaped, uttering a more minimal synth approach in contrast to the sound we just witnessed. Blending the interesting cold wave with more of an atonal, but also melodic sound-scape, quenches the thirst of anything heavier. As the isolated, lonely roars of a disenfranchised individual lets itself be heard, amongst an atonal but semi-melodic wave of thought.

The wonderful thing about it is the fact that the singer lets out his deeper meaning, in times of great decay blended with power electronics, as the sound is categorized in two dimensions. Dissecting itself, roaring into the colder realms of apathetic and violent outbursts of hissing rage – to the more clarified and melodic sensibility of synth pop with minimalistic tendencies. Philosophically, the art that descends from this vibrant mixture of concrete coldness and wicked melodious content, can be fed to the mind like the food of thought brought on to you by some of the egregious philosophical basics. Some of the same modus operandi can be felt in “Heart Drench“, but with a somewhat different mood. Overtones of power electronics are more forthcoming and a part of the mixture, but what makes Marrow Mandler such a fantastic act is that he simply ignores the more atonal elements of the genre. There’s an interest in hardness and boldness, but there’s also a weird sense of cold emotions channeled through raw melodies, which is a great entryway into the more mild and crossed over power electronics. Not saying that it’s mild in its manners, because it’s not, but it generally doesn’t bombard you constantly with noise and hard industrial tendencies. It’s a gnarly episode, trying to entwine the different dimensions of such a multifaceted artist. His graciousness with cold wave, minimal synth, industrial and power electronics in the mix makes you question yourself. As the colder waves are seemingly covering your body, like a cold shower, making your system malfunction to a degree.

This is sorrow, hate, anger, apathy and the whole graded scale of negative emotions. But in one way or another, he channels them into some kind of positivity in the end, as we all are forced to learn the hard way. Which takes us to the title-track “Sensual Seas“, boasting with its fractionate baseline and gradually forceful but atmospheric attitude. Casting waves of cascading light upon the cliffs that we’re sitting on. Performing a spectacular show with only the needless feelings of grandeur, spilled upon the flesh like toxic material, perforating the skin on a shallow level. Short, but stout, as can be said about lots of things. Certainly, the emotionless wouldn’t be affected by it, as the emotions range from low to high. With a slight circle of meaninglessness being repeated over and over again. Pretty much, this is a song you wouldn’t want to wake up to, but certainly one that you’d want to fall asleep to when you’re high above the water – on the cliffs, where the force of water is soaring down below. Time for some more, with the song “Uncertain Affection“. You never know why, but at times you get some retro feelings from the music. Simply stunning visuals of the nostalgic past, where 2D textures were the latest thing. It seems like he’s inspired by this, at least to a tiny degree.

Since he incorporates both the linear sound and the versatile corrosion on multiple genres. The arpeggio madness continues and you’re stuck in between, where the additives seem to put your brain to work. Something about it is so primitive, another is on the intellectual forefront. Not that the music is hard to understand, but the different flavors of darkness needs to be tasted – as well as the once-in-a-while light that graces you with its presence every once in a while. Which is continued within “Inward Demise“, it sounds like the atonal freakishness blended with cold wave heartfelt feelings, bleed us dry. Another important factor is that he wants to take chances, both when it comes to the rhythm itself, the atonal machine madness and the more emotionless. Conquering realms that haven’t been accessed by others, in a while at least. Frequently showing off the strength, as well as the weaknesses that bring Marrow Mandler closer to the musical core than anything I’ve heard in the same genre. Sure, there are the greats and fundamental inspiration, but his version of distorting but developing power electronics is simply beyond anyone. Also, the rhythmic hardness of the industrial “Oblivion Dive“, could’ve been a villain in any Disney movie if I ever saw one.

Crawling deep into the hole of despair, madness, cold wave, minimal synth and the wondrous electronica that seemingly slips out of hand. Everything seems to have strings attached to it, as the melody bounces around the disdained atonal melody of the industrial drums. Somehow, Alice In Wonderland comes to mind, at least when the psychedelic layer of seduction is placed upon the ears. Hearing is a task, not a fourth sense anymore. Difficulties, progress, regress and everything in between the crackling synths, noisy environment and continual linear and non-linear landscape. Mindfully enough, “Rocaille Intercourse” is the calmest song on the album. Almost like the one-minute seance of “Sensual Seas” but simply even more atmospheric. It feels classic, emotional and nostalgic. Not in the vein of looking back, but in the vein of taking inspiration from times past and re-igniting them. It’s probably one of the more layered sequences I’ve heard in a while, which really wasn’t that predictable. Unpredictability is best when in the perfect setting for it, as you wouldn’t expect it this close to the end of it.

As a summary, the last song “Soft Shards” really plucks everything back in that made Marrow Mandler what is really is. The core “values“, if so to speak. Rhythmic, close to arrogance, but still apathetic. Melodic, pristine, but ghastly noisy and industrial to the very bone. Angelic synthesizers that soar from the hole down in the deepest pits, to the upper echelon of heaven’s high. Forsaking what’s important, keeping what’s of most importance. Contradictory terms, atonal victories, sequential outbursts of maniacal shrieks and coordinating synthesizers boasting about their strength. Well, this album is one of the best I’ve heard for a while. Simply because of the fact that I’m not that fond of brutal power electronics. He opened up an entirely different world, by blending that brutality with sincerity, atonality and melodious currents. This is something you should check out if you haven’t already.