Some questions for Boris Records!

I like to have a peek into the lives of people that make records possible, or just people that like to help other people out. When it comes to music, there’s a lot of labels, artists and bands that rarely get the opportunity to answer questions about their doings. Therefore, these series are meant as a sneak peak into their business. It is not meant to be extravagant, long or in-depth. I just want to know what they’re doing and I want to promote them in any way possible. This time, I asked Boris Records, a local Atlanta label that releases records related to metal, a few questions. Remember to support your local label in any way you can, if you like what you’re hearing or what they’re doing.

What would you say make Boris Records different from other metal-related record companies?

– I created Boris Records to help support the Metal scene here in Atlanta. I only release records by Underground Georgia Metal bands.  As long as there is enough good Metal coming out of Ga. I don’t see that changing anytime soon. In recent years there has been a resurgence in the Metal scene here and as a Metal fan, Boris Records is my way contributing to it as well as documenting it.

Could you tell me what the main focus of your releases are supposed to be when it comes to metal – is everything included?

– No shitty core bands – just good Metal. I just a released a great Thrash record by Sadistic Ritual. The two records before that were Death Metal records and my next release will be by Hellgoat, a Black Metal band from Atlanta. After that I’m putting out another Thrash record, a Doom record and a couple of more Death Metal records. It’s all really diverse good stuff.

What other companies influenced you to start up Boris Records?

– I dig a lot of smaller labels like Detest, Deathgasm and Hells Headbangers, but I think it was more of a realization that there was no one focusing on releasing records by local Metal bands that gave me the idea to start up Boris. I grew up in Texas and the Metal scene there in the 80’s was insane, so in retrospect I guess I just wanted to help get some of that same energy and excitement going here in Atlanta, that I experienced in my youth in Texas.

Currently you’ve released four releases with metal but could you tell me anything about the process behind the making of each album?

– There is no real process. It’s been slightly different for each band. Basically, if I like a band enough to put out a record and the band is into it, then we move forward. I have zero interest in making money at this. Ideally I’d like every record to generate just enough money to put the next record out.

So, what would you say is happening in the near future for Boris Records in these times?

– I should have at least five more releases out by the end of this year – including more insanity from Spewtilator (7″), a CDEP from Disfigurement and I’ll also be releasing a 10″ vinyl this summer from a new Atlanta band.

Quickly, move fast, we’re at Thee Showcase again. It’s time for another round of great music. First up this time is the band Torquem, which is composed of three guys from Paris. They’ve currently released their latest album “Ansiktet“, which means “the face” in Swedish. Well, I would know, because I am after all a Swede. Delving into their world is a happenstance that would slowly but surely evolve into something greater. The tight rhythms, the suggestive melodies and the emotionally consistent music that they’ve put on for display, blends the best of jazz-influenced intermezzos and post-rock-induced experimentalism from different ages. It feels like you’re on a trip from a time and age to another, whilst you hear the clinging saxophone speak its own language, with fluency, as the baseline drums in another part of the song and; here comes a sample. They call themselves “cinematic rock“, which is something I would agree on. There’s difference changes in the structures, as the melodies change and as every mood is being displayed throughout. This multifaceted piece of music is simply unveiling itself, with ambitious intent, to knock us down on the floor. Ambitious would be an underestimate, because every song feels like an orchestra that simply puts its mouth to it. Even though the songs might not be that long, every piece of instrumentation makes sure that the huge suspense offered, doesn’t get lost in between structures. It feels like they’re connected and you can simply sit back and relax. The sound-scape itself is grandiose, but simply doesn’t want to leave any detail out of the mix, so whoever mixed this piece of interesting music should be proud. Gradually, you’re welcomed into the world of Torquem and it’s a pretty wonderland filled with experiences, extended periods of suspense, gratitude, sorrow and a sense of belonging. Thank you so much. Songs range from “Floehm” to “Elveleiet” and it was released on the 1st of March, by themselves – I guess. If you’d ever want a CD rather than the digital experience, you can mail them about it, over here. 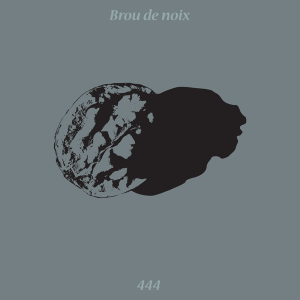 Meet your maker, or meet your raver. Or something like that. Anyway, the group Brou de Noix are from France or Japan. I don’t really know which country. However, they’ve currently released an EP or something, titled “444“. If you combine the darker elements of industrial, the atmospheric guise of ambient and the concrete sound of old-school electronica, in the wake of dance or disco – is this what you get? I don’t really know. There’s so much going on when it comes to the genres, that it’s hard to categorize. But booming beats, hard industrial noises and cars driving past you is a common denominator. Well, if you’d put the word disco beside the word industrial and threw a party within the confinements of an abandoned warehouse, this is possibly what you could get. What’s clear about it is that it’s a totally new approach to what you’d think could be electronica. Everything is at its point and peak, the trashy sound-scape waltzes around, trying to get your attention. But it’s slow enough to not be a stirrer. I must agree that my brain is in total decay now that the stereotypical formula can’t be placed. You know that I’m not formulaic, but damn, this is hard to describe. Willingly, I’d bet every penny on it being one of the most experimentalist approaches in a while, worthy of that particular word, in comparison to everything that gets it slapped upon itself. Quickly, put on a gas mask and head for the elevator, we’re going to party in an abandoned warehouse – together with Brou de Noix and their post-disco-industrial-rave-music. The three tracks featured on this release are “Ashes“, “Compost” and “Where the wild things are“, it was released on the 3rd of March and is totally D.I.Y. for what I know.

Since I feel good today, I had to add a third band to this list. How about some alternative rock meets classic post-punk? Yeah, I know, I saw it in your eyes that you wanted it. This is another one of those bands that compare themselves with Joy Division, which is undoubtedly a little bit true. Most of the time I ain’t too keen on them, but this is an exception. They’re from the UK and have played in bands like The Xcerts, Bleech, Native and The After Party. Not that I know any of those bands, but that doesn’t matter anyway. They’ve currently released a single for their upcoming album titled “Patriot“. Something that gets me with their music, is their sense of nostalgia and how they can mix it perfectly in between shades of silence and a hurricane of riffs that face you directly. Only thing I wouldn’t be a fan of is the snaredrum sound, because it hits me off balance each and every time. Well, it’s saved by the wonderful ranges of British dialect. His sincere words cut through butter like a hot plastic knife. Or, yeah, it feels like someone is cutting an onion in front of your eyes. Very emotional, this release, with everything topped off. I guess the most important thing is how they arrange the instrumentation, how they fit in the different overpasses and how they do it with such precise vigor. Because it’s everything that you’d need to get an emotional reaction of this scale, because I recognize myself in some of the lyrics that they put out there too. Which is a great point for a band that I haven’t known anything about in the past few days. It feels like I’ve known them for ages, by now. The riffs, the drumming and the suspense when the singer and the back-up go out in a whirl is amazing in one way or another. The only track featured is “Patriot“, which was released recently and will be available for streaming on their bandcamp until the 18th of March, then it will be available for download together with the B-side titled “Lets Go Out“.