An interesting voyage into the realms of Budapest. Or no, I mean, into the realms of art rock meets electronica. These guys chose to name themselves Kamikaze Scotsmen, which is a funny name when you see where they’re from (Budapest). Their latest album “ARK” had its premiere today. Anyhow, I don’t care really, because the name is pretty suitable. Probably something I couldn’t have come up with myself. However, this music sounds like a metamorphosis of the wicked 70’s psychedelic era and the more “up to the sky” kind of philosophy, whereas holding a piece of land isn’t enough, since you need to transcend beyond the ground. The strange “full-of-motion” music, but at the same time motionless music, makes your head twirl around, for 360 degrees before it finally stops and re-iterates some strangely familiar vocals. Like someone seducing you with their voice, simply by understanding the pattern of the brain in that moment. I don’t even want to talk about the lyrics, they’re good as they are, but as confusing as this blend of art rock and the aforementioned stuff that I couldn’t really bargain for. This is probably one of the strangest releases I’ve ever experienced, but it’s original and that’s mainly what I’m after in Showcase. Sometimes I’m after other things too, but the originality of this piece frightened me so much that I had to include it. All kidding aside, some pretty psychedelic music here. Featuring the four tracks “Chapter II“, “Rising (Inhale Me)“, “Minsk” and “Slaves“. You can buy it down below if you think this is something you’d enjoy listening to.

I haven’t really featured an act that plays doom metal. I’m not really sure why I haven’t done that, but now is the time to forget my sins and delve into the world of Mount Salem. Which is a four-piece rock’n’roll/doom metal band from Chicago, Illinois. Their latest EP had been released two days ago and it’s titled “Endless“. On the shallow end of the pool, it sounds like any doom metal band you’d ever hear in your life. But there’s something special about this band, the way the vocalist enhances her own ambiguous voice to fit each situation the sound-scape is in. There’s something classical interpreted into the music they make too, which takes it to a whole other level then your regular doom-metal chugging, as it envelops into something beyond the grasp of yourself. Also, the singer’s voice is a great substitute to the all too familiar loop of doom singers that just sound alike. She also has a different kind of aim with her lyrics, as it turns into a story when she sings her lyrics, more than it is emotionally engaging. Not saying that it isn’t, but there’s a broader focus on the telltale originator of the lyrics themselves. Which makes it sound more like a real deal, then it would’ve if she hadn’t employed that particular tactic. Oh, by the way, the music is also great. All-round with a rock’n’roll sound that can break sound-barriers, together with the slower nature of doom metal, also accompanied by a sorrowful backdrop of both psychedelia and the horror itself. So, yeah, you should definitely check them out. This release features the songs from “Good Times” to “The End“, which make up two of the six songs, the first and the last.

There’s one band that I never ever thought of featuring in this Showcase. But I chose to do so anyway, because there’s something about their music that gripped me. The band Radio Days from Milano employ some of the classic transgressive wonders of rock’n’roll mixed with power-pop. Their upcoming release “Get Some Action” could really have been taken from whatever American sitcom, show or TV-series you could ever imagine. But there’s also something about their music that transcends that category of simply being generic power-pop mixed with other genres. Maybe not their vocals, but at least their skilful use of percussion in some of the songs. Also, the way they choose not to compromise the atmosphere of their songs because of likeability. Because I won’t lie, this is music that is really easy to listen to. But that doesn’t have to mean it’s basic, but it’s one of those albums you might actually put on when you’re so tired that you simply can’t grasp any other genre for a while and just want to relax. The music in itself is very likeable, it doesn’t stick out in a bad fashion, it simply sticks out in a better and non-threatening fashion. It’s not a bad idea but it’s something you can listen to regularly because of those different factors that contribute to the whole mix. Tracks featured on this album is from “Burning Together” to “My Dreams on the Ground“. Unfortunately, you can’t listen to every song yet, but you can at least listen to the three songs: “Love And Fun“, “Everything Floats” and “My Dreams on the Ground” for now. If you like what you hear, you can pre-order. They have all kinds of different packages, which surprised me, because it seems like a great idea but might not be affordable at all times. Good one.

When there’s like no synth-pop you like and all hope is out, fear not, because the band Fuka Lata from Poland have instilled a renewed hope in an otherwise forgotten genre. Not forgotten as in nobody cares, but forgotten as in nobody seem to master it anymore. Even though they’ve currently released the single from their upcoming album “Velvet Daze“, the trance-like approach to synth-pop with luminescent vocals makes for a magical three-way combination. They pick the best influences from chillwave, but utilize the weaknesses of that genre, by assessing synth-pop as their overtly noticeable foreground. The multifaceted nature of this particular song blows me away, even though I’d love to see less trance involved and more synth-pop. You can’t have it all, though, so I am happy to listen to what I’m hearing. Especially the more climactic nature which evolves out of the vocalists precious vocal chords, carrying her onto the divinity of the mixture before everything escalates into an even more danceable concoction of the wonderfully diverse but constant landscape of sound. However, there’s not much more you can say about it, other than what has already been said. Maybe another thing could be added and that is the nature of the music they’ve produced so far is elegant in all its necessities, but vicious when it has to pull out its claws. Currently only featuring the title-track “Velvet Daze“, but surely might be releasing something more soon, but I don’t know. You can pre-order it if you wish but I’d rather wait until another track or two are visible.

Oh, yes! This is everything that should and could be right about a revival. Namely the revival of early folk meeting uncomplicated indie-pop. I think I’ve heard about them before, or it’s just that I mix them up with every other act out there with a similar name. However, their name is Wooly & the Mammoth an they’re from Brooklyn, New York. They’ve currently released their album “At Bay“. Even though it might be one the more mainstream side for the unapologetic underground creature that I am, I would say that there’s a multitude of things to grab from this band when it comes to combining elements. At least when it comes to making it easier to listen to folk and also because their music is pretty well-produced and the fact that most of the band actually can sing with something more than vocoders and other enhancing methods. Nah, just kidding, I don’t really know how I can compare it since I don’t listen to vocoder-music. But I believe that the instrumentation, the back-up singing and everything fuses so well that the emotional side of me got to me. So the more stone-cold and hardhearted rationalistic side of me had to bow down. Even though I might be dissappointed in some way, shape or form – they actually try to make each song as personal as possible. At times, it might sound like you’re listening to the same song, but some of the intros reveal a whole different side of the coin. Well, you should check them out because they actually deserve it this time around, I think it’s a strong first release. Tracks featured on this release is everything from “We Are Love” to “Carry On“. 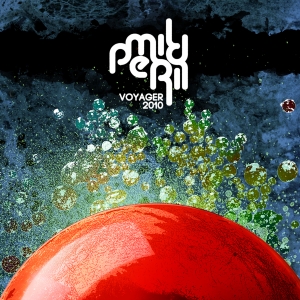 Woah, this reminds me of nostalgic times. I would say something like Command & Conquer Gold/Tiberian Sun becomes non-soundtrack music and develops into something greater. The artist behind this is Mild Peril which is from the UK, namely London. If there’s a way in which electronic music should or could be conducted in, he definitely leads the way. His latest collection of tracks “Voyager 2010” was released a week ago or so, containing tracks he made from 2009-2010. If we turn back the tide to the 90’s, it’s what could be said about his music. Sounds like unmitigated video game music, at least when it comes to the more action-packed and realistic (but also unrealistic) sides of things. The way he handles the synthesizers is simply jaw-breaking. Even though he translates into calmer and more looming terms then that expression. Also, a little hit of futuristic R&B can be find with the sampling he’s added to the mix in the songs. But I guess that dub and synthesizer mayhem (to a degree) would be better lines to drop. There’s also somewhat of an underlying ambient core that produce the wonderful connections in between the different synthesizers. He’s also got somewhat of an outlook on the retrospect. He brings out the best of those times and make it into the new times. Another thing that strikes me is how complex his melodies and the general atmosphere of the sound-scape is, he’s not doing something half-arsed or redundant – because he apparently knows what he’s doing. There are three tracks featured on this release: “Voyager Sequence I-II“, “Voyager Sequence III” and “Voyager Sequence IV“.

Last but not least is a surprise which I chose to include. Mostly because I wanted to outdo myself. I wouldn’t say that I’m a fan of witch house, but it’s a genre that has grown on me for a while. The duo Force Publique from call their own music “darkgaze“, which is really a blend of the best elements from electro, darkwave, witch house and pop. Since a week ago, they’ve had their single “HUNGER//PALE” up for your listening pleasure. I don’t know how I didn’t find them a week ago, but I guess I’ve just traveled past that category and forgotten about it. There’s something utterly sinister about their approach, like some kind of created brainchild, by welding Crystal Castles, Ladytron and The Knife together. It’s got all that teenage emotional rage going out through each vein in my body, pumping in the darkgaze to my otherwise lit lighthouse. Generally, if you’d deliver this to me today, I would’ve just put it off as something to do with “hipsters”. But nowadays I don’t really care to make that generalization, because this is something beyond that stale category. How they get such an atmosphere in their music is beyond my reach. I’m honestly surprised that witch house meets whatever genre you could put in would generate such a huge, sinister – but at the same time reluctantly mature, and satisfyingly broad sound. Both the tracks on this album show how versatile they are, and I honestly love their voices because they tell a tale of their own whilst the general atmospheric ingeniousness is unprecedented. Well, I don’t know about you, but I will be monitoring this duo closely. Tracks featured on this release are “HUNGER” and “PALE“. You should make an effort and download it, because it is free of charge.