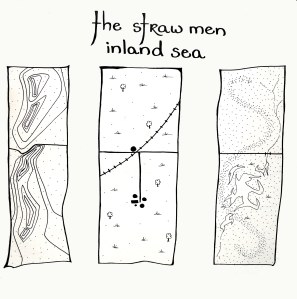 Have we got something for you right now! First up is The Straw Men, which basically was a post-punk/alternative band from the Sydney 1980s and they’ve re-released some forgotten material from their album “inland sea“. They’re really unconventional when it comes to post-punk, as they deploy some more funky and blues-oriented sound combined with that particular genre. At times, they sound like a combination between Au Pairs and some other unknown band that I can’t really categorize. Every single riff, the drumming and the atmosphere tells a story in itself. I would say that they don’t even need any lyrics, because you can tell by the sound-scape that it’s a whole adventure put down into the mix. There’s always been some different takes from Australia when it comes to post-punk, which is appreciated. You shouldn’t underestimate their employment of the psychedelic elements either, since they pull it off perfectly. The songs featured on this release range from “Refugee Stomp” to “Into The Night“, and it seems like they’ve self-released it.