END_OF_DOCUMENT_TOKEN_TO_BE_REPLACED

This is a special-edition of My New Fascination which is directed at the wonderful guy who owns Bunkerpop. It will contain one of two reviews, one of the re-issued version of Coïtus Int. first release “Dead Excitement E.P.” but also of Null And Void and their brand new release of material recorded in between 1981-1982 titled “Possibilities (Discoverable Thoughts)“, which will be featured in Special Ed. 2. In this edition, I’ll go through the Null And Void release. You should support Bunkerpop by venturing over to his website and ordering these two gems, which will aid the label-owner in his quest of seeking out and preserving old gems.

END_OF_DOCUMENT_TOKEN_TO_BE_REPLACED

A compilation with some undiscovered tracks and great punk acts from the US. First song is by the band Druglords of the Avenues, which is titled “This is a Pig“. Which feature some of the well-known punk-elements that deserve to be in the foreground, with rapid drums and an interesting anthemic touch to it. Reminding about the sorely missed days of the earlier punk eras of mainly the end of the 80’s and the beginning, but also middle of the 90’s. The drums are absolutely ravaging the sound-scape as it gives you an adrenaline injection in an instant. Some of it is nostalgic, but the singing blokes in this song heighten it and make it a great track for starters. Which makes the need for a continuing punk-overdose even more thought about. Next up is the band Disguster with the song “My Kick“, which doesn’t escalate in such frightful tempos as the first one. But it certainly doesn’t lack the original punk-sound of the beginning of the end for the 70’s, coming off with a more rock-oriented phase of the punk rock sound. The singer’s voice may not hold up such a sound-scape, but he at least has the ambition to drive it further and the sound-scape doesn’t lack anything that it should’ve needed. But sometimes you feel a need to wake the singer up a little bit more and tune him up a notch, but it is all fine in the end, because its a pretty good song overall.

END_OF_DOCUMENT_TOKEN_TO_BE_REPLACED

Putrid filth spewed directly from the gaping mouth of the abysmal death-industrial/dark ambient duo called Deathstench, based around Darea Plantin and John–Paul Whetzel, whom also worked within the band Welter in thy Blood. As the black oil puts on a layer of disguise, they rapidly move into the first song on the album titled “Extractum Ex Infernis“. The whole picturesque scene that upholds itself, suggests that an almost ritualistic wall of death-industrial paves the way for the lesser elements of this song. Going ahead in a manner of strength, stinking up the whole place with the vocalists utterly distorted wave of noise. The whole continuum of the sound-scape brazenly lighten up the darkest emotions from within, conjuring horrific pictures inside an ever numbed down skull. An almost propagandist feature is the repeated words heard in the background, almost as an instructional guidance for this visually gruesome landscape of gigantic splendor, in the way of the smutty putrefaction. The repetitive notion of the sound-scape waltzes on in its own particular manner, as it autonomously pulsates on with sheer destruction in mind. As a novice within the genres, you’d expect it to be fascinatingly obvious to pinpoint the exact partition divided between the genres. But from what you hear, the overt dark ambient is forcefully managed to step on and include the darker elements of the genres, as the death-industrialist expose can work within, undisturbed. Emotionally, this is a masterpiece, as it steps on your toes with no forgiveness and continues on like the amoeba it is. Gathering different intelligentsia from other corners of the vitally important genre-sphere, as it delves deeper into your mind, haunting your mind with the most susceptible mixture of ignominy. You simply can’t ignore the vastness and cunning of the machinated abyssal void that is coming right at you.

END_OF_DOCUMENT_TOKEN_TO_BE_REPLACED

Being one third of the avant metal drone collective of Locrian, the sole perpetrator Terence Hannum embark on a rough journey between industrialism and meditative unconsciousness. We’re slowly walking down the steps of the first song “Ceremonially Clean“, which jump-starts your inner senses and collectively shroud you in the madness of distortion and the hegemony of experimentalist dark ambient. Static noises that wobble around a processed sound, clutching your attention with the sheer destructive force combined. The somewhat hardline presence of an industrialists joy, turn the coated noise into a spectacular event of figurative representation. The deepening possibilities seem endless, as you gaze towards the monstrosity that forms around you and tries to take over. Walking in between the different spheres, realms and dimensions of sound and represents a tiny fraction of what can be done musically if you have the courage and wit to surpass these notions.

END_OF_DOCUMENT_TOKEN_TO_BE_REPLACED 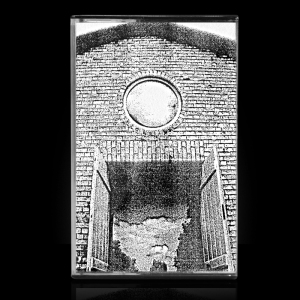