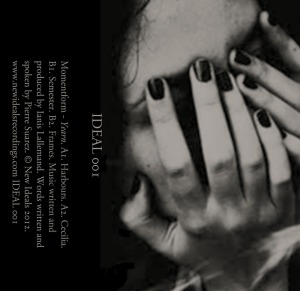 A cut in between minimalism and cold wave. There is not anything edgy about this, but there’s surely a wave of ambient swooping into the category of cold wave. With the first song “Harbours” surely getting away with it. The sound is actually portraying calm waves in my mind, which I would say is the epitome of the name. Like small waves cutting through the rocks and making it almost up to a cliff. It makes me think of the sea as a whole and what a powerful force of nature it can be. The minimalist sounds of this song leaves more to offer beneath the cloud of judgement. It seems, above the surface, to be nothing but a bland piece of ambient meets cold wave. But there’s actually a lot of subliminal stuff going on beneath the waves, which draws my attention towards the changes in between the more minimalistic and the more bombastic, since the sound seems to flutter a lot in between those two spaces. As if it opens a door to the other side of the sea, in which it docks in another harbor.

Everything that could be conjured through a girl’s name is something I’m going to like. I’m hoping that the track “Cecilia” won’t be an exception to that formality. It’s got an edge to it that the first track lacks, or that the first track really wasn’t meant to portray. With ramblings in french and a more clean cut cold wave sound, but without the weird stature of it. There could easily be something implemented, a video or the likes of it, for this song. Because it conveys such a harsh sound-scape and really brings out the darker side of Momentform. With the pulsating baseline, lo-fi drums and the whole environment of it, it’s really the essence of what could be a progenitor for the blend of both synth and wave. Even though I believe that something is missing in the mix, it doesn’t really change my opinion of the song. It’s got something in it that I can’t really grasp, but there’s no sloppiness involved and its been fixated in my mind for the whole day.

The track “Semester” seems to be more of a lo-fi and minimalistic synth-pop piece than anything else. The quirky melodies remind me of the old-school 80’s sound in many ways. Somehow I wanted to put Depeche Mode into the equation, but its far from that. However, I wouldn’t be surprised if it was a hybrid of that and the more cold wave oriented bands of the past. It seems like there’s a pattern that repeats itself throughout the song and leaves a lot to wish about it, but I believe that it escalates rhythmically later on in the song. But at this part of the cassette, I begin to get bored with the music at hand. Since I love variation and I love unvaried acts at time, it can get a little boring in between the more rhythmic and melodic parts, since it continually repeats itself, even though in different variations.

Concluding this listening experience is the track “Frames” which is outstanding in many ways. It conveys the perfect mix in between quirky melodies and lo-fi experimentalism. There’s something about the sound-scape and warmth of the sounds that make it sound almost analogue. Since I don’t know if that is the case, then bravo! The analogue sounds make it even more worthy to listen to. It doesn’t matter if it is or not, but it seems to be and it adds a little bit of extra punch within the sound. I also think that to a degree it almost sounds like something that would be more suitable in the 8-bit sphere. But, at times, the intriguing sound becomes bland and boring. It seems like it is very repetitive and it makes me feel like I’m bored out of my mind. Hopefully his sound will develop throughout and I hope that he’ll continually improve himself. I must say that at times, this felt like it was my cup of tea, but sometimes it didn’t.