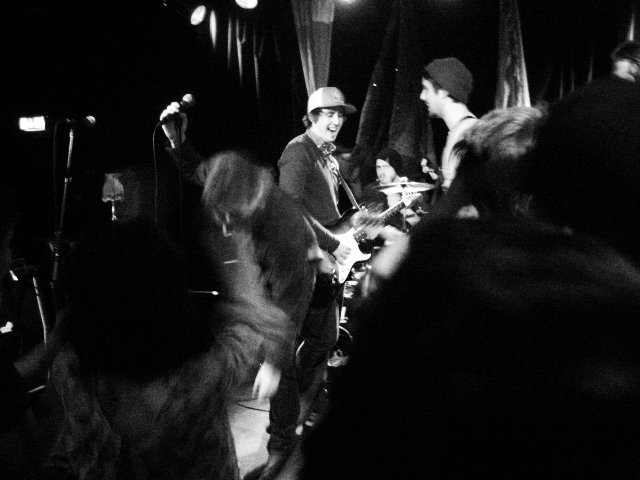 Moron Express is a band from Frösön made up of the following members: Philip Westerberg, Simon Isaksson, Alex Mangs, Alex Lund, Johan Persson. They play a mix of pop, rock and punk. Being around since 2010 make them quite a new band, up until now they’ve released their debutalbum One Way Out and are planning to realease their upcoming EP titled Same Old Songs in June. They’re one of the eight bands featured on the compilation Hotet Från Skogarna, which I’ve been interviewing. We talked about their new album, the music industry, Hotet Från Skogarna and much more. Tune in for this weeks third band in my HC/Punk-series from the compilation Hotet Från Skogarna.

Hello Moron Express! Could you tell me more about yourselves? Have you played in any other band prior to this one?

– Hello! Well there’s five of us in the express and some of us like to skate while others like to play video games and drink beer. Johan and Philip are members of the band Djävulskap and Alexander. M used to play drums in The Dead.

Why be fat when you can be thin?

– Because food tastes good, we like to eat. We’re not that fat.

So you’re going to be featured on the compilation Hotet Från Skogarna, tell me more about that? Could you tell me anything about the two tracks you’re contributing with?

– Yeah! We’re so psyched to be a part of the project. Everyone is nice to us, although we’re a bit worried about the critics. Some would not consider us very punk but it’s ok! One of the songs has kind of a “folky” edge to it and the other is just straight up rock’n’roll! It’s cool.

Where do you draw your influences from that aren’t musical?

In what way would you say that you’ve evolved since your first release?

– We write better songs that are easier to play than previous stuff, and there’s something that’s linking the songs together. We have found our sound I guess.

Why did you choose to have a horse as front-cover on your latest release One Way Out?

– Because a horse is always better than a pig and we suck at photoshop.

You’ve played at the prestigious Storsjöyran last year, did you do well? Are you pleased with your effort?

– Yeah that was a lot of fun! We did well indeed, but for some reason we ended up playing the songs super fast. Not “Grundskolan – fast” but still. We got to drink free soda backstage and a lot of people showed up!

What would you say is your best memory of the years with Moron Express?

– The band on the road in a mini-buss, listening to Spraynard , drinking Jägermeister and playing “would you rather”.

Do you have any certain ritual that you usually do before getting on stage? 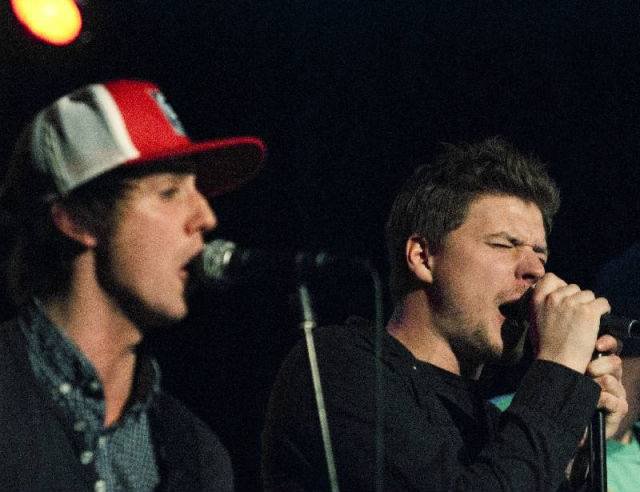 What do you think about the other bands that are featured on Hotet Från Skogarna? Do you have any favorite?

– They’re all really talented and we like the variation of bands. Grundsskolan is a favorite.

If Moron Express throws a party – what will be included and what will happen?

– Wooh! In a pipe dream Bill Murray would definitely be attending. There would be a mini ramp and a punk-cover band dressed as Storm Troopers. But in real life I guess we’d settle with cold beer and good music. Stereotype much?

What do you think about the Swedish hardcore and punk-scene as it is now?

– You can’t get enough of punk bands but it’s a fair scene. We want to see more bands like Sista sekunden and we’re happy that bands like Millencolin still plays.

Could you recommend any other upcoming bands that you like very much?

I’ve seen that you’re currently producing material for your upcoming EP Same Old Songs, could you tell me about the in-studio progress? When will it be out?

– Yes Sir! We spent four straight days recording it on Frösön where we live. We just got back the master and it sounds sweet. The EP will include eight songs and the date of release will be sometime in June. It will also be available on Spotify and iTunes.

Where would you say that you’ve gathered your inspiration and influence for your upcoming release?

– It’s very much from New Jersey. Bouncing souls, The Gaslight Anthem and Bruce Springsteen. I bet you probably find a little mo-town in the song melody. We gather much inspiration from books and movies.

Do you have any funny anecdotes from the recording of your tracks to the Hotet Från Skogarna compilation?

– We recorded an Oreo cookie –  commercial. We should upload it! Oh, this is getting hyped. I don’t really think it was that great.

– This is hard. Reminds me of Game of Thrones, but that’s not silly so I would go with: “The danger of the north” Obviously it means a lot to us. Who knows what might come out of this and we’re thankful of all the help we have received since day one and of everyone that has participated in the project.

So when you’re not playing with your band or in the studio, where do you usually hang out and what do you prefer to do?

– Out in the nature, either fishing or snowboarding. Our bassist leaves for “Stavre” whenever he gets a chance. We usually hang out at eachothers apartments, just goofin’ around.

If you were a music-journalist, how much points would you give your latest release on a scale of ten? Elaborate!

– How does one answer this without sounding like an a-hole? We’re very proud of what we have created and if a music-journalist gets it like we do he’d give us a ten! Who would want to put something out without feeling, completely satisfied with the work? On the other hand, we’re not that serious about ourselves and we would gladly settle for a nine or even an eight.

Do you read any fanzine on a regular basis that you’d want everyone to know about?

– No, not at the moment, but if you know some we’d be glad to check them out!

Would a fair translation of your band-name to Swedish be “Idiotexpressen”?

– It would indeed! Nice work!

So what main subjects do you take up in the songs you’ve made?

– Everything from The Geneva conventions to panic anxiety and good times.

What would you say have been your best live-experience so far?

– Opening for Legalize Lora on Storsjöteatern in Östersund. The crowd was amazing. One guy in the crowd even played bottleneck with his beer on Alexanders guitar. We got to play extra songs, hurray!

In your opinion, what is the best venue for playing your kind of music – if we limit ourselves to Sweden?

– Hm, maybe a bigger club but still close to the audience. Playing on the floor getting people flying in to you would be rather cool.

What is your opinion about the music industry as it is now?

– There is good in it and there is bad. You can usually find something good in most genres and sub-genres. Music has lost a bit of its value or at least a copy of a CD or a vinyl has, and that’s sad.

How would you define yourselves as people – do you have a positive, cynical or negative outlook on the world as it is?

– Even a blind man would see all the things gone wrong in this world, but does our negative outlook help changing it? We’re pretty positive people and that might be a strength that helps us affect (for example) the environment to something better.

Do you have any primary message or purpose with this band? Where would you want to be in five years from now?

– Being in this band is really just for fun, although the message we send out is important to us. If you’ve had a shitty year, then write a good song and have fun with it. That seems to be our repeating cycle. We take interest in society and politics but that is not our main message in music. I guess  the purpose is to make music for all people regardless of their believes and thinking. In five years we´re a bit better and hopefully every member can grow a full beard.

Are you going to play any shows in the near future?

Which place is the most beautiful place you’ve ever been to in Sweden?

Thank you for this interview! Do you have any last words to put out there?

– Thank you and thanks to everyone who took their time to read this!

You can find them over here:

One thought on “Interview with Moron Express!”