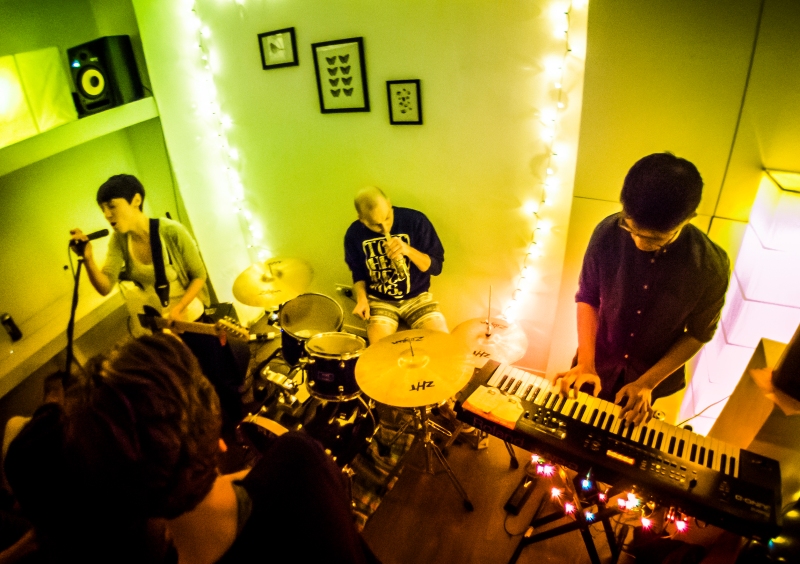 Dear Leaders is a band consisting of three members: Paddy Burland (Drums), Jess Whelligan (Vocals/Guitar) and Tim Wong (Keys)  that emerged from Bristol in late 2009, they play a combination of electro, surf and ethereal dream-pop. With their first self-released  debut EP Not Summer, really shows their versatile ambition with the music they create. Over a two year period they managed to change completely from a bedroom demo-band to a fully accomplished live-act. Since this record was written over the period of two years, amidst relocations from Burma, Norwich and London – the track Cold reflects the upheaval of that period whilst Not Summer reflects the easiness of the simpler times. They’ve also collaborated with the eminent Bristol-artist Katy Christianson, that also designed some of their artwork for them. She also adorned the walls for their first EP-launch gig at Hardy Tree Gallery in London. This coming summer they’ll perform at Thekla and also the Bristol-based Dot To Dot festival. I got the opportunity to interview them about their influences, their launch gig and much more.

Who are you and have you played in any band prior to Dear Leaders?
– Who are we? Well, Jess sings and plays guitar, I play keys, and Paddy plays drums. We all went to university in Bristol and met there, although only after a few years had passed. Jess actually played in an experimental duo with our friend George for a little while, and I booked them for a gig while I was helping to run the Indie society at uni, which would probably have been the first time we met. Paddy was in a band called Parma Violets, there’s a video of them playing about six years ago floating around somewhere on YouTube.

Recently you had your EP-launch gig. How did it go and were you satisfied with the end result of it? Did you get anything out of it?
– The launch night was the best thing we’ve done by quite some way – our friends rent a little art gallery in Camden, right next to St Pancras station and it’s a really amazing venue. We’d played a low-key gig there before to open one of their exhibitions, but this time it was the whole room full of people there to see us – As well as the EP and the usual merch, we had loads of artwork on display by our friend Katy Christianson (http://drawninbristol.co.uk/artist/katy-christianson/), she did all the artwork for the record and our posters. She’s got this amazing, intricate illustration style that’s completely hand-drawn, the level of detail in her work is amazing. It all helped to make it even more of an event –  we’ve played bigger gigs in the past, but this time all our best friends were there, as well as some people we hadn’t seen for years, all packed into this little room while the trains at the station went past outside the window. Surreal. It was the best gig we’ve ever played, as well as the most enjoyable one – we were buzzing for ages afterwards.

What are your favorite tracks from the Not Summer EP? And what do you think about it yourselves?
– Isn’t that a bit like asking someone to pick their favourite son or daughter? You go through phases of liking certain songs more than others. Not Summer and Cold in particular sound completely different when we play them live, so you also get attached to certain arrangements – the recordings of those two tracks came out particularly well in the end, but with Cold in particular that’s partly because we spent ages where it just wasn’t sounding quite right. It’s a great feeling when everything then clicks into place.

Are there any other bands that have caught your eye recently that you’d like to recommend?
– This weekend we saw Y Niwl – they’re a surf band from north Wales – Their music is a throwback to the 60s, completely instrumental and incredible live. You can imagine them on a Tarantino soundtrack or something like that, they’re that cool.

Could you tell me about your main musical and aesthetic influences?
– There are a lot of different influences mixed into the band, obviously with a number of common reference points, but we’ve never really talked explicitly together about what our influences are or how we’d like to sound – it just seems to happen. A lot of our songs have come out of jams during practices, which is probably testament to that. Because we never really talk about it amongst ourselves, it means we’re even worse at describing our influences when other people ask…  I guess we all grew up listening to guitar music – It’s a really general, vague term but it fits – punk, indie, folk, more experimental stuff.. Then there’s classical; Jess plays cello and still messes about with Bach suites when she thinks no-one is listening, I did grades on piano and flute while at school. Having that sort of training definitely changes your outlook on music, but we’ve never written a single note, stave or clef or anything down on paper when writing Dear Leaders songs, so it’s pretty hard to quantify. Inevitably when you leave home or go to university or whatever, your tastes and influences change a lot because of the new people you’re mixing with – I listen to a lot more electronic music now than I did when I was, say, 15 years old. Paddy listens to a lot of hip-hop, Jess has often had dance mixes on recently. If pushed, we would probably agree that The Smiths were a pretty important band for us all, but then we sound nothing like them. What’s most interesting for us is asking other people what they think our influences might be.

Do you have anything planned for the near future and when will you consider to release an album?
– Our priority right now is to play as many gigs as we can. Having just released the EP we’re not thinking about doing a full-length album just yet. We’ve got enough songs to do it, but there’s no hurry – it feels like the most enjoyable thing for us at the moment is to play live and improve as a live band.

It seems like you’ve played live long before your first material was released. What was your best experience and how have you developed both live and in the studio since then?
– Yes, it’s taken us a while to get the record out into the world – we started playing together a few years ago but have never actually recorded in a studio; the EP was all recorded at home. We won a battle of the bands competition which offered studio time about a year ago, but the promoter ran off and we haven’t heard from him since. We’re all studying or working during the week so we have to make sure we organise time for the band, but we’ve found it’s so important to practise and gig regularly if you want to develop. It sounds really obvious, but it’s true – you can play a great gig one week, but if you’re waiting too long for the next one then you don’t really build up any momentum and you don’t go anywhere.

Do you have any last words of wisdom?
– Always eat your greens.

You can also find them over here:

One thought on “Mini-interview with Dear Leaders!”