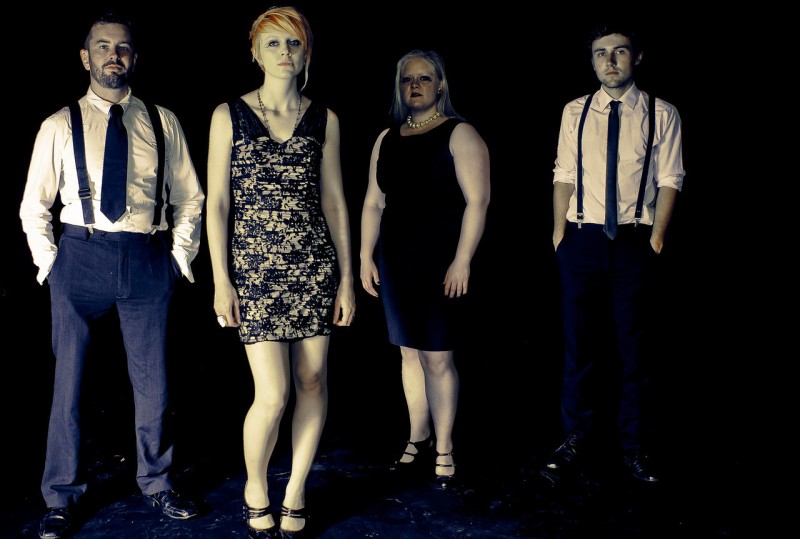 Birdeatsbaby is an alt-classical-punk four-piece outfit from the UK. Consisting of Mishkin, Charlie, Garry and Keely. What I was going to state here has already been said before, so I don’t mind if I don’t. I got the opportunity to talk to Mishkin about philosophy, the music industry, beer, what they’ve got in store for us in the future and much more.

You’re featured on the compilation “A Dark Cabaret 2”, what made you participate in that compilation?
– We were offered a slot on the compilation from Sam Rosenthal who runs Projekt Records – I first heard about the genre Dark Cabaret through the first compilation and loved it, so a chance to be on the second one was an easy decision! I’m sure it’s given us a lot of exposure and new fans too so it was great to have that opportunity.

Why do you think is the reason that you’ve got more fans in Europe and the US than England?
– I’m not sure… I do think that the ‘klezmer’ or ‘gypsy punk’ element in our music is more popular in Europe anyway so perhaps that’s why. Also the UK music scene is a little saturated, too many bands and venues and not enough quality. We seem to have an unusual amount of fans in Mexico, I’m not sure how that happened but I imagine the cabaret scene is pretty big there!

I saw on twitter that you wanted to get together and play with Jill Tracy, how come? Is she a big inspiration to you?
– I heard Jill on the Dark Cabaret 1 compilation, I think our music would work quite well together as we’ve similar instrumentation but deliver in completely different ways. I would just love the opportunity to work with someone who has a similar approach to music, and to perhaps collaborate in some way, it could be amazing to duet with her!

What would be your philosophical inspiration, are you all a bunch of Kantians or do you follow the teachings of Aristotle? Tell me!
– Philosophy? Wow that’s a tough one. I don’t think any of us follow Kant or Aristotle, our philosophy would be ‘make music, party hard and don’t be a dickhead’. …or something like that, only more clever sounding!

Aesthetically speaking, what would be your inspiration? You seem to have a somewhat dark approach, yet everyone automatically puts you in the dark cabaret-compartment. How would you define yourselves aesthetically?
– We would define our music as a blend of classical, punk rock, cabaret and progressive. It’s very hard to categorize so I think that’s why everyone labels us as Dark Cabaret, which isn’t the worst description! We prefer ‘alt-classical punk’ though! The dark element mostly comes from the lyrics, especially our earlier work.

What do you think about the releases you’ve put out there up until now, I mean, you as in yourselves and not as in music-critics?
– We are very proud of our current release – I think it sums us up so much better than our first album, which is very manic. This record is more defined, better executed and slightly more mature (very slightly, haha). Feast of Hammers is definitely how we would like to present ourselves to the world, as we feel it’s our best work so far, and more in keeping with the direction in which we’re moving.

I always try to put in a question about the music industry, some artists are positive towards it and others are more cynical. But what do you think about it?
– It has it’s ups and downs like everything. On one hand we can reach people all over the world through the magical internet. On the other hand, making a living has never been harder – I don’t think we’ll ever be rich and famous, but we’d prefer not to be constantly broke!

– We work incredibly hard to put our music out there, it’s really nice to have a bunch of fans who appreciate us. Schemes like X Factor and BGT are quite depressing as it’s just a massive money-making plot and seems to take precedence over hard-working musicians and real artists. I guess that would be our only gripe, it’s not all bad!

Since you seem to be drinking a lot, what would be your tip for the best pub in Britain? And also abroad?
– Excellent question! Best pubs in Brighton would have to be The Foundry for it’s excellent Guinness and surroundings, The Great Eastern for great beers and atmosphere, or The Ranelagh for amazing staff, music and a great night out. Abroad? Generally everywhere we’ve been drinking in Europe was a winner. German and Dutch beer is best.

What would then be your favorite beer?
– Tyskie or Orangeboum…

Do you have any recommendations on bands that have recently emerged, that you like very much?
– Recently emerged? Gabby and Other Young Animals, Marcella & The Forget Me Nots and She Makes War. All female led alternative types who rock.

Have you got any new releases planned for this year? And where will we, most likely, see you the nearest weeks or months?
– We should have another single coming off the new record, and we play London on the 27th April with Joe Black and Ribbon. All tour-dates for the summer (when we go to USA and Europe) will be revealed on our website shortly.

What is your favorite record of late 2011 and early 2012 that you would recommend with the uttermost sincerity?
– For 2011 we would have to say Marcella & The Forget Me Nots – Born Beautiful. It is a heartfelt stunning rock album with unusual instrumentation and timeless songs. My personal favourite is ‘No, Billy Please’. For 2012 the Band of Skulls new record is pretty sweet, but there’s so much more music to come… We’ll have to see!

Thank you for participating, do you have any wise philosophical advice to my readers?
– Thank you! Hmmm… How about ‘live life, drink beer and listen to Birdeatsbaby.’ …Please don’t blame us for any strange consequences though!

You can find them hiding out over here: